ClearLynx previously published a report looking at the physical (direct) deals and how they performed compared to traders in ARA, Gibraltar Straits, Fujairah, & Singapore back in November of 2020.

When looking at the most recent 3 months, December to February, a different story is beginning to take shape. In November traders were on average $10.90 better than physical VLSFO deals. However, by December 2020 that performance fell off by ~$8 to $2.49 better than physicals. Performance continued to fall with traders performing just a dollar better than direct deals in January before ultimately seeing physical (direct) deals performing $8.57 better than traders on average. Looking at the ARA, trader margins were even for VLSFO in December but steadily increased by $7.50mt in the subsequent months to reach a $15 differential between direct price and traded price by March 2021. Similar trends played out in Singapore and Gibraltar with Fujairah the least affected of the four ports mentioned.

The same patten is also showing up with LSMGO. Since December in ARA, Fujairah, Gibraltar Straits, & Singapore the margin between traded deals and physical (direct) deals has went from traders outperforming physicals by $2.48 to now physicals outperforming traders by $6.18 a change of over $7 in price point. It is interesting to note that Fujairah has seen more of change in trader margins with gasoil prices than with VLSFO. Traders previously outperformed physical deals by over $4 in December, but by March 2021 direct deals were $15 lower than traded deals.

From September to November traded deals accounted for 14% of the stems in the aforementioned ports, and that number increased by 3% in the following three months to 17%. We see this trend increasing in 2021 as prices continue to rise more each month.

This jump in traded volume could be due to many suppliers having their credit lines maxed out with the rise in prices and traders are acting as a fall back option with credit on demand and even potentially longer terms. Many owners right now are struggling to get credit lines which is why traders’ expansive network of global offices and credit lines are becoming more appealing and necessary in this new COVID environment. 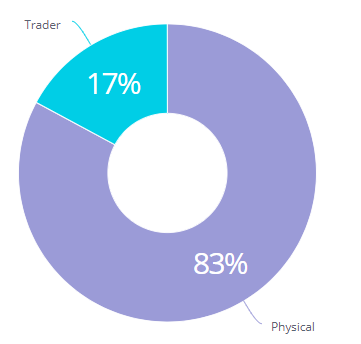