Last week oil prices had their longest period of sustained gains (9-days in a row) in nearly two years as crude prices sustained levels north of $60 a barrel for the first time since last January. That rise in crude has obviously coincided with significant bunker price movement, which came of no surprise to ClearLynx as we previously estimated VLSFO prices would touch $500+ in January in our end of year recap from December.

To show just how much prices have moved this year, ClearLynx took the time to break our market report prices into buckets, taking prices from Feb12 close and comparing them with prices from 3 months ago, Nov12. 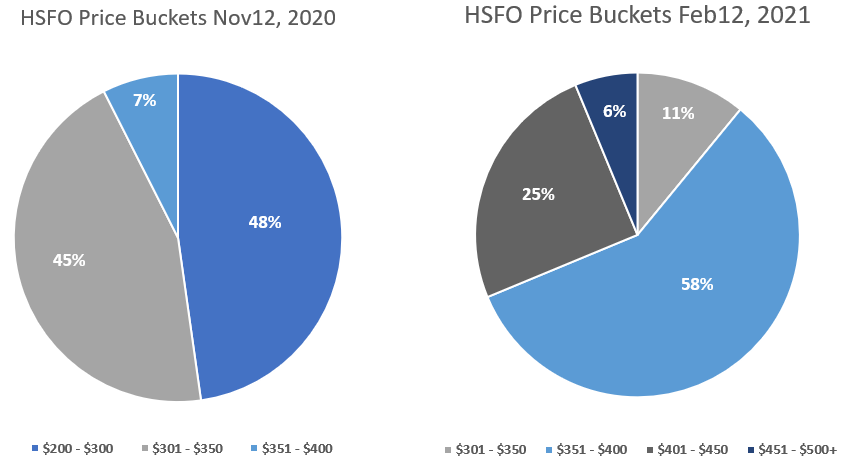 With such a significant rise in prices one has to consider the impact this will have on not only the bunker budget, but the ability to secure credit lines. ClearLynx created this example based on an owner lifting 500,000 MT over the course of a year (70/30 LSFO/LSMGO split). Using the AVG $/MT for each quarter of 2020, the projected spend would have been $183 million USD. When using that same tonnage and split but looking at prices for 2021 so far, the projected budget is already at $227 million USD, a 24% increase in spend, and that is just based on Jan & Feb prices, so that number should only continue to rise as the year continues.

With all of that said, ClearLynx wanted to see the grade distribution from January 2020 and how it compared to January 2021’s split, as with prices on the rise, scrubber economics may become more of a factor in 2021.

The above results show that overall, there has been a 10% increase in HSFO lifts from January 2020 to January 2021, while LSMGO & VLSFO lifts decreased by 4% each and “others” fell 2% as well. An indication that spreads may be widening between HSFO/LSFO and shrinking between LSFO/LSMGO. To help visualize this further ClearLynx looked at some of its top ports AVG $/MT from November and then compared that to 2021 so far and the shrinking in spread between LSFO/LSMGO and widening between HSFO/LSFO is evident.

ClearLynx will continue to monitor price and crude movement as 2021 continues. If there are any ports or regions of particular interest to you and your company please do not hesitate to contact ClearLynx through the CONTACT US button below for more information.